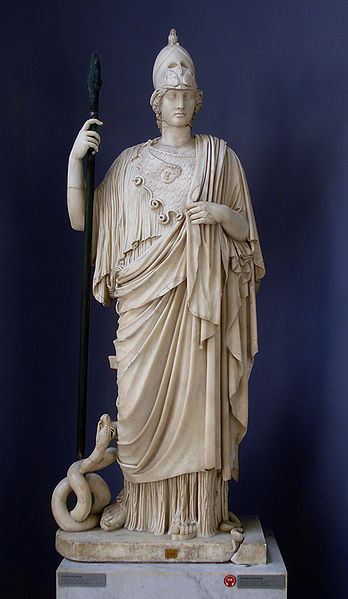 Athena was the first Goddess that I connected with strongly in a spiritual and religious way. By that, I mean when I really began to dig my heels in and study this path, Witchcraft, as a religion and not as an academic intellectual pursuit, Athena was right there helping me through that transition.

So for me, personal experience beyond what her lists of qualities and attributes are, tells me she’s a very smart lady.

Because Greek myths are the most popular in our western culture in America, they are the ones most schoolchildren are given exposure to at an early age. I loved that part of school, let me tell you. In fifth grade, our literature classes did a course on Greek Mythology. I learned about the Olympian gods and goddesses, heroes like Hercules and Perseus, monsters like the Hydra and fantastic creatures like Pegasus (which, I was already a fan of before I ever got to know him in school. I mean, what little girl doesn’t dream about horses? Especially ones with wings?)

However, class time and lessons weren’t enough to satisfy my blossoming curiosity about these things, so I used my library card and checked out scads of books on the subject. I read Bullfinch’s Mythology and devoured it, keeping it still as a favorite among my collection.

Still, as to how I formed a close relationship with Athena, I really can’t say precisely when it started. I believe now she was always there and always had her hand on me, I just know when I recognized it.

I used to rent an apartment that had a man-made lake in the center of the complex, as an accent to the landscaping. So there were lots of ducks and geese that found their way around and on any given day, you could expect to go outside with a bit of bread and feed them. Or you should have expected to go outside to feed them, because these spoiled rotten things would assault you if you did not.

There were also small songbirds and various other bits of city wildlife that could be found. There were no large, tall trees however… not within the complex grounds in any case. Most of the landscaping trees were the small, decorative, flowering sort. So it was very unusual to see a two-foot tall owl sitting on one of these low branches, bending it beneath its weight, in the daytime as I left for work. Stranger still was it to see this same bird later on in the week perched on the skinny dogwood that was near my back patio as I went out to feed the horde of waterfowl. Again, this was during the day. If an owl was expected to be in view, it should have been sleeping. This one was wide awake and right there on the branch three feet from my patio fence.  It was beautiful, and majestic, and kind of scary. I never let my cats outside anyway, but now I was even more cautious.

I had not attempted to make any sort of connection with any god or goddess, not in the formal, ritual sense. At this point, I was still thinking in terms of the Goddess being the earth-mother type, or a great cosmic lady, because in the books I had studied, that’s generally how she was presented.  This was really the time I was about 80% bookish and only 20% experiential. I was actively practicing now, but still had a very eclectic and solitary way of doing so. I wasn’t part of a group, I only saw other Pagans at gatherings or classes or workshops. I would conduct my simple rituals and rites in my living room, generally quietly because I didn’t want to disturb my neighbors at night with loud noises like drumming. I didn’t put any sort of ‘deity connection’ to seeing the owl. I just thought it was unusual and considered it as that. When it stopped coming around afterwards, I just went back to my normal mundane existence and didn’t really think about it much.

Until I couldn’t sleep.

I kept tossing and turning but just could not get comfortable. My ex, whom I was living with at the time, was so patiently frustrated with me that I finally got out of bed with a pillow and small blanket and decided to try and watch television. I didn’t have a separate area for my ritual space, as I already explained. My living room doubled as a temple when such was needed. So most of my tools and implements were kept in there. I turned on the television and looked for something to watch, not anything that would really engage my mind, as my goal was sleep. But I came across something interesting on one of the channels. They were talking about Athens, the Acropolis, and various other touristy destinations and discussing the history of it. Which, I was already familiar with, but left the channel on anyway. It was interesting and I was trying to sleep, but now had something to occupy my mind with, so I just kept watching. When it got to a point of showing statues of the gods and goddesses, the artwork, and the temples, I felt this strange ‘click’ in my mind. I knew these people (gods) I knew Athena, I’d loved her stories and everything since I was young. Now I was practicing a religion that didn’t consider them to just be characters in a story. So I got up, muted the television, and lit a candle and some incense. With scenes of Greek temples and such in the background, just out of the corner of my eye, I relaxed and began breathing deeply.

I heard this ‘voice’ say, “It certainly took you long enough.”

So that’s how we met, when I was about twenty years old, sitting in my living room, watching an educational documentary because I couldn’t sleep. I am very grateful for her patience and her guidance and while I don’t really incorporate her into what I consider to be my more traditional practices, Athena is still a big part of my life and always will be.

2 thoughts on “My Gods and Goddesses – Athena”