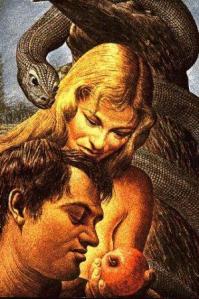 Snakes and serpents aren’t always the easiest animals to get along with. Many people are afraid and recoil from the sight of them, even small harmless ones who could do little more damage to a person than an insect sting, but I’ve always loved them. I can’t remember a time when I didn’t want to touch or hold one.

When I was little, in the first grade maybe, a keeper from the Columbus Zoo brought a large python to our school for an assembly. It was in the gymnasium and I just remember staring at the snake as it rested across his shoulders. He talked about it and I listened, but I couldn’t take my eyes off of that splendid creature. After his talk, and before he brought out the next animal (I can’t remember what that was, a hawk or something, I think) he asked if anyone wanted to touch the snake. Most of the kids backed away. A couple of boys said they did, but the most they did was tentatively whisk their hand over the snake’s back. I walked up and asked if I could hold it. It was bigger than I was and the keeper smiled and said, “No, but you can pet him.” So I did. I kept my hand on the snake as long as I could. I stared into its eyes. I wanted to put my fingertips out so that it could flick its tongue across them… I was in love.

In ancient times and among ancient cultures, the snake was observed, appreciated, and revered for its power of regeneration as its scales dulled and it sloughed them off, emerging sleek and renewed. The serpent was often equated with feminine energy, but during different periods in history it was seen as masculine as well. For my own personal take on it, I see serpent as feminine most of the time. When thinking about the myth of Adam and Eve in the Garden of Eden though, the serpent seems to have a more masculine feel to it. Not because of being equated with Satan — as is the common understanding — but as being a balance to the femininity of Eve. I think of Eve and Serpent being a more appropriate couple than Eve and Adam.

That story has always bugged me. There were too many things that didn’t fit together and it wasn’t until years later, long after I’d already been involved with studying Paganism that I figured out why.

Why wasn’t it a wolf in the garden to sway them? Why not a bird? Why not a rat or a weasel? Why a Serpent? Why this particular animal?

It was because the Serpent is a teacher. It’s a holder of wisdom and knowledge in cultures around the world. It was for this reason that a snake was chosen to talk to Eve in the story. It took thousands of years of propaganda through symbolism and teaching to move the Serpent from its revered place as a teacher and guide to a place of disdain and rejection. We are told that the Serpent was the most wise/clever/subtle/cunning of all the beasts… How do you suppose such connections were made if not basing them on the older traditions that held serpents in that regard?

If one takes the story of Adam and Eve and does not try to find other ways to interpret it, mostly based on tenuous connections with other teachings or different areas of the bible, one finds there is more to be learned about the Serpent than is commonly thought of. The Serpent is equated with Satan, yet in that particular story, no mention of Satan is even given. The only thing that makes the Serpent a ‘satan’ or an adversary, is that it directly contradicts what Yahweh says.

One of my favorite works that talks about this area is Oberon Zell’s essay We Are the Other People.  I’ve paraphrased a bit in the following paragraphs because he explains it so well:

(2:8) Yahweh God planted a garden in Eden which is in the east, and there he put the man he had fashioned. (2:9) Yahweh God caused to spring up from the soil every kind of tree, enticing to look at and good to eat, with the tree of life and the tree of the knowledge of good and evil in the middle of the garden. (2:15) Yahweh God took the man and settled him in the garden of Eden to cultivate and take care of it. Now this next is crucial: note Yahweh’s precise words: (2:16) Then Yahweh God gave the man this admonition, “You may eat indeed of all the trees in the garden. (2:17) Nevertheless of the tree of the knowledge of good and evil you are not to eat, for on the day you eat of it you shall most surely die.”

(Gen. 3:1) The serpent was the most subtle of all the wild beasts that Yahweh God had made. It asked the woman, “Did God really say you were not to eat from any of the trees in the garden?” (3:2) The woman answered the serpent, “We may eat the fruit of the trees in the garden. (3:3) “But of the fruit of the tree in the middle of the garden God said, ‘You must not eat it, nor touch it, under pain of death.” (3:4) Then the serpent said to the woman, “No! You will not die! (3:5) “God knows in fact that on the day you eat it your eyes will be opened and you will be like gods, knowing good and evil.”

The Serpent directly contradicts Yahweh. Obviously, one of them has to be lying. But which is it?

And now we come to the crux of the Fall. Yahweh had said back there in chapter (2:17), regarding the fruit of the tree of knowledge, that “on the day you eat of it you shall most surely die.” The Serpent, on the other hand, had contradicted Yahweh in chapter (3:4-5): “No! You will not die! God knows in fact that on the day you eat it your eyes will be opened and you will be like gods, knowing good and evil.” So what actually happened? Who lied and who told the truth about this remarkable fruit? The answer is given in the next verse: (3:22) Then Yahweh God said, “See, the man has become like one of us, with his knowledge of good and evil. He must not be allowed to stretch his hand out next and pick from the tree of life also, and eat some and live forever.”

Get that? Yahweh himself admits that he had lied! In fact, and in Yahweh’s own words, the Serpent spoke the absolute truth! So who, in this story, comes off as a benefactor of humanity, and who comes off as a tyrant?

It is my understanding and belief that this story, like all myths, is a metaphor. It’s a lesson. The ‘Fall’ isn’t about disobedience and sin, it’s about the loss of innocence that comes with knowledge. It goes with the statement “Ignorance is bliss”. If you are unaware, naive, unknowing, and ignorant of something then you exist in a state of innocence. It’s almost a childlike suspension of understanding where the concept of suffering or consequence just doesn’t register for you. It’s living in a paradisiacal garden where every moment is perfect.

But we aren’t happy with that. Humanity isn’t satisfied with living in ignorance. We hunger to learn, to know, to experience all that life has to offer. It’s the blessed curse of our human nature. So, we took Serpent’s advice, we tasted the fruit of knowledge and oh, how sweet and tantalizing it was… but at what cost?

Being removed from the Garden was not some fanatical overbearing father-figure’s punishment for disobedience. Instead we were evicted, expelled from the paradise of ignorance and thrust into the realm of knowledge, knowing how things really work and really are and that there is suffering, toil, pain, and death.

When you know the truth, you can’t live in the fantasy any longer. That is what Serpent taught and that is what our human ancestors willingly accepted and thank the Gods they did!

The Serpent should be honored for opening humanity’s eyes and what is considered ‘willful disobedience’ of man should instead be cause for gratitude and celebration because otherwise, without knowledge, we’d all be automatons living an illusion of what we are truly capable of being, and to me, that’s not a paradise.

To me, that would be eternal suffering and punishment.

One thought on “The Serpent, The Fall, and The Reason”