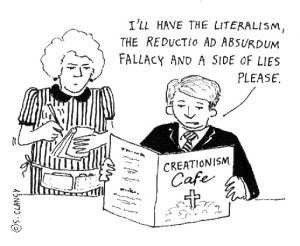 I haven’t addressed this before, at least not here on the blog, though I have mentioned  my own personal take on the Adam and Eve story. But now it seems (not like it ever really changes or gets a break) that congressmen in various parts of the country are trying to push Creationism being taught in public schools as a valid scientific alternative to evolution.

This is wrong on different levels. First, Creationism is NOT science.
If you believe that Creationism or “Intelligent Design” is science, you really do not understand how science works.

Second, when you mention “Creationism” in this country, everyone immediately assumes you mean the story in the Judeo-Christian bible’s book of Genesis. That is only ONE creationism option, however. There are THOUSANDS of myths that are all equally valid to the people of those cultures and beliefs. This is without necessarily bringing up the ones being studied and used in ritual practice by today’s modern Pagans. What about the indigenous population of just THIS continent? The ancient stories of the Native Americans, Aztecs, Mayans? What about the immigrants to this nation who have brought their own beliefs with them from Africa, the Middle East, Asia? School is for science. Religion and history classes, if done properly with respect and time given equally to various systems of belief, are the place for Creationism stories. But that wouldn’t achieve the goal that’s really at the bottom of all this fuss: indoctrination of other people’s children into the Christian religion, because equal time and attention to all belief systems isn’t the agenda. Congressmen seeking to have these things passed aren’t interested in seeing intelligent, well-rounded, knowledgeable children emerging from the school system. If they were, I wouldn’t have as much of an issue with this. But that’s not the case. There are ways to present religious philosophy and education in schools, but that’s not the route being taken. So, it’s best to leave all religion out of the schools until such means, time, money, and educators can be found to ensure the alternative.

Now, to begin, a defintion of terms needs to be given and explained to assure that everyone has the same understanding. The definition of THEORY when used by scientists is: a statement supported by overwhelming evidence that both explains and predicts phenomena. A THEORY is a statement made after evidence has been gathered and for which there has been no disputing evidence offered to render it incorrect.  A theory may be disproven, but until it has been, it remains valid and understood to be accurate. The Theory of Evolution has never been disproven — that is why it is still called a Theory. The term ‘theory’ in this case is evidence as to its accuracy and supporting data, not its supposed concept as a ‘best guess’.

A theory is the conclusion reached at the end of the process of experimentation, performed by following the scientific method (I learned this in 3rd grade) which begins with a hypothesis.

A hypothesis is a ‘guess’ made based on observation about what you think will happen. For example: “I spilled milk from my cereal on a bit of bread and it got moldy really fast when I didn’t remember to throw it away. I think mold grows faster on bread that has been dipped in a mixture of milk and sugar than it would grow on dry bread.”

From this, experiments can be set up and followed to reach a verifiable conclusion. These experiments can be repeated by other people [scientists] and a collection of data accumulated to either prove or disprove the hypothesis, and determine for for themselves if the bread grows mold faster if dipped in the milk and sugar solution.

A THEORY in this case would be the verified conclusion, (which bread grew mold faster: dry or milk/sugar?)  based on the data and evidence presented. A scientific theory is not the same as a ‘guess’. A THEORY comes at the END, not the beginning.  A THEORY is fact in this case, and is accepted as fact by other members of the scientific community because they have done the same experiment and reached the same conclusion. That is SCIENCE.

The non-scientific definition of theory is like a guess. In colloquial usage, a theory is something someone thinks about something. This is not the same as a scientific theory.

Evolution is supported by literally billions of pieces of data. Creationism is not a THEORY. For it to be theory, it has to both explain and predict phenomena, and it has to be tested in verifiable, repeated experiments. This has NEVER been done. It is at best an alternative hypothesis. However it is an easily discredited alternative hypothesis simply because there is no evidence to support it other than opinion, belief, or a logical sequence from a set of philosophical or religious assumptions.

This does not even touch the arena of what all is included in “Creationism”. Whose idea of creation gets to be taught?

Creationism, in any form, is not science. It is philosophy, mythology, and religion. Personally, I’m partial to some of the other sets of mythos in preference to the “Adam and Eve” story and I like some versions better than others.

One version, less talked about than others, of Egyptian mythology states that before there was anything else, the universe consisted of darkness, wind and water. Then eight frogs emerged from the water and sang to each other, causing a lotus to appear, and the sun was sitting right there in the middle of it. Nevermind that the sun was hot enough to evaporate the water and immolate both the frogs and lotus, that’s not important!

And if you believe that, then you can believe that the sun masturbated and instead of semen, he ejaculated two lions (must’ve hurt). Then the lions mated and created all living things, including us.

It doesn’t matter that the sun has no genitals, or that the lions wouldn’t fare any better than the lotus and frogs. This story is the valid basis of belief for the ancient Egyptians, and whose belief system is followed today by many Kemetic Pagans and Egyptian Reconstructionists.

This is a valid creationist story and I demand that it be taught right alongside the story with the talking snake!

Or maybe you follow the creation of the world by Ymir the Frost Giant’s remains being used by Odin and his brothers.

If it is only the Judeo-Christian version being given air-time, then that is religious discrimination, and it is giving Christianity more clout in the government than other belief systems. When religion is sanctioned and given preference by a governmental institution, that is a violation of the Constitution’s establishment clause. Church is the place for religion. School is not. Choose your church preference, or study and teach your children in your home according to your beliefs. You don’t get to interject your personal philosophy in school, present it to other people’s children, and have it passed off as legitimate science when it is not.

If you so strongly object to them being taught science, then there are options available: religious or parochial schools, homeschooling, private tutoring, etc. Also, if you want to say that Creationism should be taught in schools, and limit it to the Judeo-Christian version, what happens when children ask questions on other areas of this or Christianity that the teacher is not prepared to answer, or if they answer them but don’t give your preferred slant or interpretation of things? There are lots and lots of Christian doctrines out there… How are you to be sure yours is the one that gets picked?

Would you accept or be wiling to have science and the Theory of Evolution taught in your children’s Sunday school classes? I’m personally available to come to your church and explain, in full detail with books, overhead projections, filmstrips, and testing packets the Theory of Evolution. I’ll just wait for the church, any church, to call me…

Oh, wait… You mean you don’t want your precious little ones to be indoctrinated according to something you don’t agree with or believe in? Well, silly me… What in the world was I thinking?