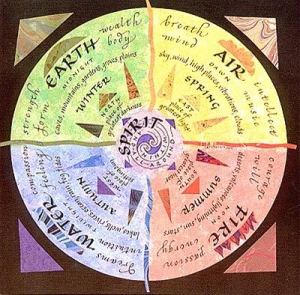 The newly interested seeker’s first question after, “How do I get started?” is typically followed by, “How do I find a teacher/others?” I know what it feels like to be alone and starting out on this entire journey by yourself. It can feel a bit intimidating or overwhelming and there is nothing so secure, it seems, as having a helping hand to guide you along. I felt that way when I first started. But I had no group, no teacher, no mentor to tell me what to do until my third/fourth year of study.

Drawing on such resources, like my own self-discipline, resolve, and determination, made me a better student, and I believe a stronger Witch. Instead of focusing your attentions at the beginning on finding the lone hermit Witch or Wizard who is going to take you on as an apprentice and teach you all the uses for every single green plant in the world, use this time you have on your own to really find out what you believe, what you’re made of, and who you are.

There are lots of teachers and groups out there. How will you know which you should go with or learn from if you don’t know in your heart what you truly value and believe?

If you are at heart a vegetarian or vegan, but the only group you can find to study with honors the Great Rite as a hunt and reveres the God as the Great Stag and the Goddess as the Divine Huntress, should you sacrifice your own beliefs to study with them? How real are their rituals going to seem to you if deep down, you don’t agree with what they do?

If you’ve always felt deeply drawn to ritual robes and the alternate state caused by wearing special clothing, would you change your mind if the only teacher you could find took the Charge of the Goddess command “… ye shall be naked in your rites.” as a literal requirement for worship?

This is why these first months or years of study that you have where it’s just time between you and the gods is special and sacred. Do not waste it by wishing you had someone else to tell you what Witches believe. Spend it in prayer, study, journaling, and meditation. Find out what it is about you that makes you the Witch you are. Is your strength in divination? Herbalism? Astrology? Scrying? Dream interpretation and omens? Healing? Protection? Are you a warrior type? An activist?

Are you drawn to the Norse pantheon of Vikings and conquerors? Of Valkyries and Warriors? Of Ice and Fire?

Are you drawn to the Egyptian feel for magic and sorcery? Everlasting beliefs in curses and the afterlife?

Do you feel connected to Native American or Alaskan Shamanism? The beliefs of the old Hawaiians? Aztec, Mayan, or Incan rites?

What about the old initiatory religions of Greece, Anatolia, and Rome?

Are forests and caves your temples like the Celts and Druids? Standing stones, oak groves, and circles decorated with spirals?

Are you called to African and diaspora traditions of ancestors and spirits?

Use this new time to find out.

When you learn this, THEN seek a teacher who can guide your studies further. Seek a group who has similar interests and beliefs. A group you can really connect with and grow with.

Just don’t be afraid to grow on your own first.

A lot of people new to Witchcraft are interested and intrigued by what they think it is. Perhaps they’ve seen movies or television shows, read books, or talked to people with a similar interest. Maybe they were drawn to it by the idea of inherent powers in stones, herbs, and their own bodies. Maybe it was the idea of being different or special or just not going along with what everyone expects of them.

Maybe it’s part of a growth process and Witchcraft or an interest in Paganism is just one more step on their path of spiritual evolution. Whatever the reason, it’s important that you start with solid knowledge and understanding. Then, if you decide this is the path for you, at least for now if not for the rest of this incarnation, you will have a compass to set your map by.

There are a lot of good, interesting books out there that deal with different areas of Wicca, Witchcraft, and Paganism. When you’re getting started on this path, it’s important to read as much as you can about everything that you can. But, please bear this in mind, do not limit your knowledge or seeking of Paganism to only books that are specifically “New Age” or “Pagan” or “Wiccan”. These books are a part, but not the only part, of where you will gain knowledge from.

Read books on history, philosophy, natural science, mythology, folklore, legends, ancient cultures, psychology, herbalism, naturopathy, and dreams. Just because a book has the word “Wicca” in the title does NOT mean it contains vast secrets and complete spiritual guideline.

That is very important twice over because there are variances in Pagan belief and practice. When you are getting started and just testing the waters to see what you can learn and what will provide the most growth for your spirituality, it is vital that you learn much but accept carefully.

Also, try to be knowledgeable of the history of your choice. If you are drawn to the ancient Celtic way of practicing Witchcraft, that is fine. Read books on the Celts. Read about their wars, their gods, their ways of life. Religion and belief was an integral part of their everyday existence. Yes it is true we do not live in a Celtic society now as it was thousands of years ago, but if you would honor the Celts in their own ways and strive to remain as true to their traditions as possible, research them.

You may be surprised to learn that the Celts did not work predominately in terms of “Four Elements” as is often prescribed in books on Wicca, but rather in sacred Triads. Their forces were Land, Sea, and Sky. Most books that cover Wicca with a Celtic slant don’t add this element into their research. You would have to study outside of most “New Age” books to find Celtic practices that follow the triads and not the quarters, but this is only one example of what to be mindful of.

There are also various other topics for study that you can delve into. Read as much as you can. Take notes on what you find. Study and learn and ask questions about things you agree or disagree with.

If or when you find a teacher or a group to study and practice with or learn from, the first question they will ask you (if they are trustworthy) will likely be, “What have you read?” You should be able to answer this honestly and be ready to answer more questions (and ask some of your own) based on the things talked about in your repertoire of books.

Don’t approach a potential teacher without having done some study on your own. There are many reasons for this, not the least of which is that you should have some understanding of what Witchcraft is and what you’re looking for in studying beneath this person. The only people who claim to be ‘teachers’ who want you to come to them with no prior study are the people you don’t really want to learn from.

You are responsible for your own growth and education, so act like it and take it seriously.

4 thoughts on “How to Begin”