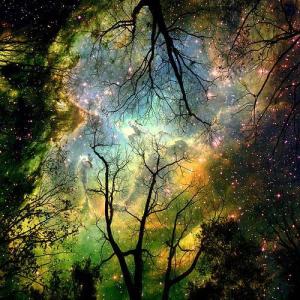 One of the things I love about being a Pagan and Witch is how it honestly feels. I can’t explain it, I just know it. In some ways, it’s probably blood-memory or ancestral. In other ways, it might just be the way that things speak to my heart. Of the ancestry I know of I am Macedonian/Slavic, Irish, Dutch, and Native American. In all of these traditions, there is a strong history of people being attuned with the Earth and knowledgeable of Her Mysteries.
These are my roots. The religious traditions of these people, the spiritual beliefs, once I sought them out, just felt absolutely correct to me. I have no other words to express it. I don’t begrudge anyone their particular brand of faith. Be what you want to be. Believe what you want to believe.
I just honestly can’t see how women, and non-Middle Eastern women in particular, could follow the teachings of Christianity. There is nothing there in it for females. We aren’t supposed to teach or lead, God is male, his offspring is male and supposedly never married. (This is another point of contention that I could argue separately). Women are considered weaker, more fallible, and the reason that man inherited original sin in the first place and thus are in need of salvation. Some of these are at least changing but to my mind, it seems like there is still a very long way to go towards spiritual equality. At least if you’re of Semitic descent you could have some pull towards Christian belief, by blood or ancestry. But when compared to the religious traditions of Africa or Europe where there are Goddesses and Priestesses… I honestly don’t get it. THOSE are the ways of your people. THOSE are your spiritual and cultural roots. Not this patriarchal stuff being force-fed and given as the only option. Men at least have something to gain by being Christian. I just don’t see what it has to offer women.
I almost said Judeo-Christianity before, but most people who are Jewish are Jewish by birth, so that’s what your ancestry is. Thus it’s not the same thing.

But Christianity seeks converts who aren’t of that region, culture, or bloodline. It’s a Middle Eastern religion in origin. The Middle East is a land of deserts, harsh landscapes, with little water and farmland available. It’s natural to see how traditions that speak of a “Chosen People” can come out of an environment such as this. If there is such a limit to what is available to survive, if you aren’t one of the “Chosen” ones, then you don’t live. This sort of mentality would obviously influence the psychology of a people just as the agricultural landscape influenced the traditions of Europe where the Celts lived.
There are two real sources of holy truth, and neither expresses itself to us in words. One is the universe around us, which is a manifestation of the underlying divine essence. The other is the universe inside us, passed down from our ancestors as instinct, emotion, and innate predispositions, and perhaps even ancestral memory. By combining these sources of internal and external wisdom with the literature and teachings left to us by our ancestors, we arrive at religious truths. This living spiritual guidance is better than any dusty, dogmatic “holy book,” whose writings are often so vague that even clerical scholars disagree on its meaning and whose interpretations change with the politics of the times.
I believe that each religion reflects the culture of the region in which it was created, that the beliefs of a culture represent the values and ethics of its people. Each culture is unique and so each religion is or should be unique to its people and therefore not transposable from one group to another. My oldest ancestors were polytheists and therefore Judeo-Christianity being a monotheist religion, having its roots in the desert, is an aberration for a people that has origins in the forests of Europe.

European Paganism and Christianity both originated on a regional basis. For Christianity this was the Middle East, but there was already a main Judaic religion in place at that time, so that the new Christians had to swarm out and try to convert people somewhere else. I think that Christianity is a religion without a people — without Folk — and comes reinterpreted as “universal religion.”
I personally reject this idea. The best religion for a human being should be his/her indigenous religion. Not as a “must” but as a “check it out”

… Only religions without Folk must recruit “subjects.”

… Or converts.
Witches don’t recruit because we understand that in order to be a Witch, you have to actually be a Witch. It isn’t something you can be converted to and I don’t see how it could ever honestly be something a person who is a Witch could be converted from. One can’t force a change of heart or a change of soul.

No scripture can convince me of what is Divine. But looking at a starry night, cloudless and clear, with the moon glowing down… or standing on a hill and seeing miles and miles of open land spread out before me under a clear blue sky… these can convince me there is something sacred within the universe and myself.
I am a Witch.
And I love it.

One thought on “Being a Witch”

Follow The Keeper's Path on WordPress.com
Join 213 other followers