Patriarchy – The cultural mindset of society where men are seen as being the dominant gender, holding authority, respect, and power and that women are relegated to a subservient position.

This afflicts all but a tiny segment of the world’s population. Most of the world is defined as patriarchal on some level.

In a patriarchal culture, gender roles are strictly defined and enforced. At the most extreme level in patriarchal society, the government and law enforcement intervene because women (and sometimes men) have stepped outside of their proscribed areas. At this end of things, we have the oppressive rulership of governments which strictly place women into positions of being the lesser members of their social group. Their entire lives are dependent on how they are seen by men, either fathers, brothers, husbands, and to a slightly lesser extent, other men in their society. Here is where women are punished severely for showing too much skin, speaking without permission, or being outside of the home for any reason without the permission of the male leader of her family (the patriarch, if you will). In these societies, women have no rights to their own opinions, beliefs, or even to their own bodies. Virginity is sacred, to the point that if it doesn’t exist, a woman is essentially worthless. Women and girls are seen as chattel—a commodity to be traded for the benefit of men.

Just a bit under this level is the cultural view that males are more valuable than females. Here we find those cultures and societies that are not as extreme as the first example, but which still place an overt preference on males over females. Male children are considered prizes while female children are disappointments. Women in these situations might hold a job outside of the home, but it’s not culturally approved, and there is always a feeling of shame because she is working and not being a homemaker. She doesn’t earn as much as her male counterpart, and whenever she speaks up about being treated unfairly or even harassed, she is condemned as a troublemaker who should just be happy she has a job in the first place since it’s likely a man was the first choice for the position. A woman is permitted to attend school, even seeking higher education, but she is looked down upon for this, and the men around her are given preferential treatment.

Next on the ladder, we have the place where most of the modern, industrialized, first world-type cultures find themselves. This is where America exists even though sometimes it dabbles in the higher rungs too. On the surface of things, women seem to be given a fair deal, but these subtle digs show where the balance is actually shifted towards men. Here women are conditioned to look forward to marriage and having children, to being able to stay at home and raise a family by marrying a man who is able to earn enough to provide for his household. It is considered strange if she is older than or taller than her mate, and it is generally frowned upon or makes her (or him) feel insecure if she happens to earn more money than he does in the event that she works outside the home. If she marries, she is expected to take his last name, and is viewed unfavorably, or her depth of sincerity towards the marriage questioned if she does not. Equality is talked about, and in many ways it is more present here than in other systems, but it’s not genuine equality. Women are told they have it just as good as men and they should just shut up. Patriarchy here itches and irritates, like a snake that needs to shed its skin in order to grow.

See you have to remember, it hasn’t even been 100 years since women were given the right to vote. It hasn’t even been fifty years since women could seek employment in an area other than nursing— but not being a doctor or surgeon, education— but not higher areas like university or specialized fields, writers— but not as serious scholars, only fiction and predominately the field of bodice-ripping romance novels, or service industries— but not as the entrepreneur who started the business, finance— but not as the CEO, the military— but not as high-ranking officers or most front-line combatants, and the list goes on and on, peaking in the areas of science, engineering, law, and government, which are still vastly unbalanced between the genders.

Here is also where we find terms like rape culture being used. Let’s define what that is before we go on:

Rape is forcing someone to engage in sexual activity without their expressed, ongoing, and enthusiastic consent.

Men can also be sexually assaulted or raped, however, I’m speaking about women from a woman’s point of view. This is not to exclude men from the brutality of being victims, but to focus on women for the point of this article.

Rape Culture is the idea that a woman is responsible, wholly or in part, for being harassed, victimized, assaulted, or even killed, because of her dress, behavior, or presence around men who simply couldn’t resist the urge to harm her. Rape culture is an insult to women and men. It says that women’s behaviors and bodies need to be policed because men shouldn’t be expected to restrain themselves, that men are savage, primal animals who can’t be expected to think clearly and behave reasonably once they’ve been ‘turned on’.

In the cases of sexual assault and rape, it is NEVER the victim’s fault.

The victim in such assaults bears NO burden of responsibility. It does not matter what she was doing, drinking, saying, or wearing. The blame lies TOTALLY AND COMPLETELY on the assailant. Anything other than this is ascribing to rape culture. 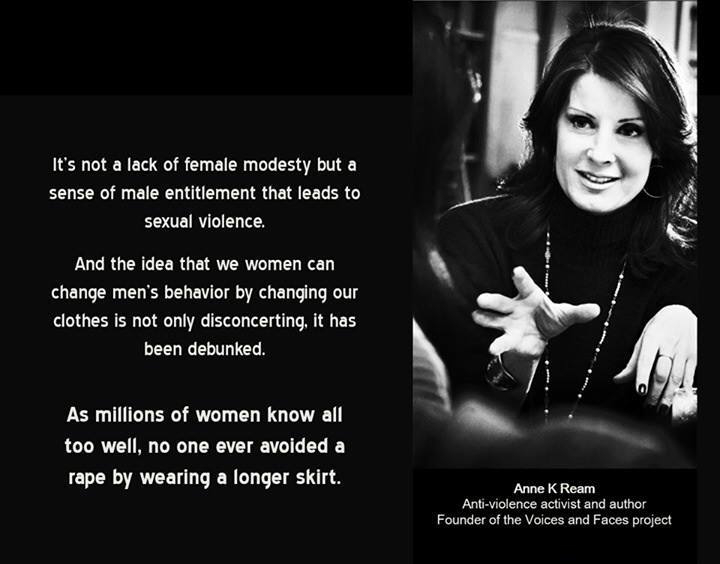 Rape culture is the reasoning behind girls’ dress codes being unequal to boys’ in schools and social organizations/gatherings. It’s the idea that if a girl wears shorts or a sleeveless shirt she is responsible for distracting boys places a distinctive value on her education and her worth that is less than his. Rather than telling her to cover up, teach him not to objectify his female classmates. This is better for everyone because it assures the female student of her worth and teaches the male student how he is expected to be responsible for his own actions.

Religion is a huge influence on the ideals of a culture, and in those cultures where religious doctrine holds political sway, we find the strongest oppression of women and the harshest doctrine of patriarchy. The point of mentioning religion in an article about patriarchal culture is to show the depth of history and the hold it has in defining these sorts of things. Basically, acknowledging its presence in this institution, and the link between the powers-that-be in cultures that hold to a religious creed that is also male-dominated clearly demonstrates that to some degree, theological impressions have contributed to and continue to support a patriarchal ideology.

The roots of patriarchy run deep. In fact, unless one really tries to work out a point on humankind’s timeline of where it originated, it falls into the disappointing realm of, “It’s just always been like this.” When something has just always been, it feels like it’s impossible to change.

But this is exactly what Feminism seeks to do.

Feminism is a philosophy that says, “Be who and what you want to be. You are a valuable, important individual and you deserve to live your best life.” This is the creed that Feminism espouses, whether you are male or female.

Feminism tells a woman that it’s HER choice whether she wants to have a career, go to school, or raise a family.

Feminism tells a man it’s HIS choice if he wants to have a career, go to school, or raise a family.

Feminism is about actual equality through the removal of proscribed gender roles and the things associated with them.

Feminism says that a man can be quiet, bookish, shy, and enjoy things like cooking or sewing, that he can be emotional without fear of shame or reprisal or being considered ‘less than a real man’, and that he can enjoy spending time with and nurturing his children.

Feminism says that a woman can be bold, confident, physically oriented, sexually liberated, and in charge of her own body without being kept under the thumb of oppressive ideals of beauty and femininity and that she’s worth more than her hymen as a complete person, that it’s her choice if she wants to have children and she’s not beholden to anyone to do so if that’s not what she determines is best for her life.

How can anyone disagree with this? How can anyone say that Feminism is wrong or bad? The only answer to this is those who want to keep people locked into the imbalance of power that The Patriarchy has established: men and women who wrongly think that Feminism is equal to hating or hurting men, or being a whiny woman who wants to be pampered and coddled to at the expense of the men around her.

Yes, there are people who act like that, who want those things, but that’s not what Feminism is working towards. It is the hope of feminists that those people will come to understand what it is we are really working for, and get on board with it. We don’t want to see our ideology turned into something it’s not by those who don’t understand it or those who are actively seeking to undermine it, who recognize the skewed imbalance of power that patriarchy has established and want to keep it that way because they benefit from it. These are the ones who sneer at Feminism and who pronounce the word with disgust, as if it’s right to say, “Oh, you’re one of those… feminists.” As if it’s something to be ashamed of.

I’m a Feminist, and I’m proud to own that word and what it stands for.

Maybe someday, you will be too, and then the world will be a better place.